I biked for a year – here’s how it went.

And yes, I biked through the entirety of February, including on the 6th, where The Weather Network says it felt like -43º.

For me, I find the fact that I biked for an entire year fascinating – I recall a conversation I had a few years back in a car with friends, acknowledging a biker on the road in the middle of the winter and how “I could never do that, how cold would you be? That’s so unsafe too, with all the ice!”

At least, I think it was something like that. And now, looking back on that conversation, I’m happy with my decision to give it a try for myself.

BIKING IN THE WINTER IS AWESOME.

In fact, biking at any time is awesome. I enjoyed my time so well, that I decided that with the data from every ride over the year, I would share my opinion of biking for a year, and how it’s had an effect on my life. In an Excel file 430 rows long, and 43 columns wide, I’ve entered a year’s worth of activity tracking data from my Apple Watch – now, keep in mind, as far as I can tell – there is no easy way to transfer this type of data… especially in the way I wanted it. So, each cell of data on my 543 bike rides over the last year was entered manually.

I. Quality of Life

All I can say is wow. Who would have guessed that moving your body for about 30 minutes a day can greatly improve how you’re feeling? Oh, wait – the American Heart Association did, as did researchers at Columbia University, along with Heart & Stroke Canada recommending at least 10 minutes a day.

I would definitely say that biking has made school, work, and life in general much better over the course of the last year. While I’m not sure if there is a cause-and-effect relationship, my overall GPA was raised by 1.61% this year (it doesn’t seem like much, but it is significant considering I studied less); I attribute that to the fact that classes in the morning (which the majority of mine were) are much more bearable, enjoyable even, after moving some muscles for the 15-25 minute ride to the University of Saskatchewan from my house.

Relationships with family and friends were better, and stressful situations were able to be forgotten for a quarter of an hour while focusing on Saskatoon’s lovely drivers (the majority of you are awesome – some though…). And while I definitely cannot say I’m a perfect driver of a car or a vehicle – I genuinely think I became a happier person, witnessing the hilarious things people do in/with their cars. Yes, I see you dancing and singing along. Yes, I see you picking your nose. But please, put your phone away.

Although I’m not fortunate enough to have really any bike lanes for any of my journeys, I found the overwhelming of drivers to be more than cautious and aware of my presence on the road. Except for the white-lifted-diesel-truck guy.

Anyways, back to my QoL. I found myself to be happier, less reliant on caffeine for energy, and better prepared for what lied ahead. Winter biking, for all its challenges, was my absolute favourite (no bugs or dust). There was absolutely nothing better than having studs on my tires, whipping through the ice, and watching people shake their heads in disbelief when stopped at intersections (not unlike myself a few years back). I was never cold; in fact, I probably dressed with too many layers on most days to the point where I was sweating – not good.

Biking also increased the time I had for other activities – seriously. Most people are surprised to hear that I saved time biking. Consider the following journey from my house to the university:

On average, based on my knowledge of the journey from the prior year, I definitely believe I saved time biking. At a minimum, I would venture that I saved about 5 minutes a day – which, over the course of a year, is nearly an extra day of time. What would you give to have that time?

My body was mobile instead of being sedentary… do I need to say more?

Of course. Because guess what – here’s where the quantitative analysis of this piece begins.

Recall that Excel file I mentioned? Not only did I track the number of rides, the length, but I also tracked the calories I burned, along with my average heart rate (it feels great to get that heart rate up by the way).

I present to you: Figure 1, Health Stats. This illustrates the major stats that I tracked, and how they ended up at the end of the year.

Let’s dive more into these numbers: I biked for a total of 6 days, 17 hours, 3 minutes, and 20 seconds. With the days that I biked, approximately 63% of the year, or 229 days, the average distance biked per day was just over 13 km. This makes sense as the distance between my house, and school or work is about 6 km (give or take a bit due to the Apple Watch’s calculations). The most I biked in a single day was about 32.32 km. On average, I biked 19 km/h – definitely not as fast as a car, but when you factor in stops at intersections, stop signs, etc., I kept pace with most cars (going down bridges is awesome – I got up to 54 km/h once).

Based on the Mayo Clinic’s estimate of what a pound of fat is worth in calories, I burned 28.72 pounds of fat. Now, that would make it seem like I got really healthy over the year. Yes, I did – my stamina has improved, and even a 5km run feels easy now. But I also really like food… so I managed to remain around the same weight as before I began, but by no means was that purposeful. Had I made an effort to eat completely clean & healthy, I would most likely be in a lot better shape.

Speaking of calories burned, on average, I burned 440 calories per day that I biked. On my best day, that shot up to 1111 calories.

I’m very happy with the outcome of the year; overall, I feel healthier and happier. Biking was worth it just for those feelings, but if you want to know the actual financial impact of using a bicycle as a daily driver, scroll on down to the next section.

Ah – my favourite thing to talk about: money. As a student of business, any investment needs a clear cost/benefit analysis. At the beginning of the year, that was difficult to do, but many resources were available and I was convinced that biking would be a worthwhile investment.

And wow, was it ever.

As mentioned above, I received my current bike for my 19th birthday back in April 2018. I’m incredibly fortunate for that (thanks mom & dad!) – but I will be sure to include the cost of purchasing the bike in some of my financial breakdowns as to not incorrectly illustrate the savings. Here we go.

At the minimum, including the cost of purchasing my bike, I saved $1107.92 over the course of the last year. That figure includes the $2701.92 (est.) that it would have taken to operate my truck. Here’s the breakdown with all of my math. For those of you on mobile, the tables are large and you will need to move them horizontally (swiping left/right on the table), but the post does display better on desktop.

Can you tell I like numbers? In all seriousness, biking was great for my mental & physical health, the environment, and my wallet.

I think it’s also critical to acknowledge that the savings only get greater over time – the longer I use my bike, the more insurance payments, gas purchases, and more expensive maintenance payments I save.

So yeah, that happened. And I’m a huge numbers nerd. Here are some closing thoughts:

Overall, my love of biking has never been higher. At first, and admittedly still on some days, it can feel like a chore. However, like most physical activity, once you do it, you feel much better. Ready for some more fascinating (by my standards) stats? Of course, and here we are:

Beyond those numbers, many interested people have asked me about the length of time it takes to bike in the winter compared to the summer (rather, when we have snow on the ground vs. when we do not). To figure this out, I simply calculated the average time it took me to bike a single kilometre over three time ranges:

While there was snow/ice on the ground, and colder weather in the air, it took me about 30 seconds longer per KM/biked. Of course, the difference could be due to other factors (wind, incline/decline, etc.) but I would say the difference is relatively accurate.

To conclude: cycling over the last year was my favourite. While I don’t live far away from the locations I need to get to, to put nearly 3000km on my bicycle over the year was significant for me. I had to replace my chain at 2880km (not too long ago) as I had worked it through pretty good. I was more than okay biking on the roads, but I do wish we had better, more useable bike lanes (such as the raised ones on Victoria Ave. – I take them to work downtown each shift and they are great), but the bike lane argument is a touchy subject in Saskatoon. While I’m content biking defensively on the road, I do recognize that bike lanes would encourage more great people to get out and bike. And while winter biking is not for everyone, it should not be something to be afraid of – one simply has to embrace the climate and go all in. I actually enjoyed last winter more than I enjoyed any other winter prior.

If you would like the excel file full of my biking data, you can get it here.

Please feel free to share my experience with biking with whoever you would like. I’m more than happy to talk about it! 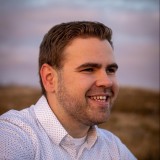 Lifelong student of the world; studying Operations Management & International Business, at the University of Saskatchewan & abroad. Riding my bike to get places, because cars are terrible.